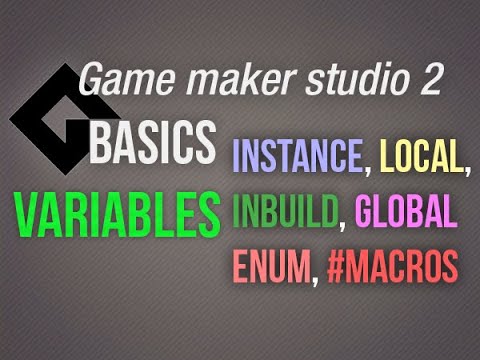 This basic video tutorial is meant for beginners who are not sure what the different variables mean and how they work.

The most commonly used variables are the instance variables (blue color) that are being used in the instance itself and not to be confused with the green colored inbuild ones which are predefined variable that define specific attributes of the instance in question. Besides these two, there you will find the local variables (brown color) useful which are not staying in the memory of the game because they get discarded after the end of the event they have been used. These are great for one time checks, loops etc. . Then there are the global variables (purple color) which are defined by the prexif/word “global” with an acessor which is a dot. These can be used in outside the instance. The last types of variables are the constants (red color) which are being preloaded into memory without the instance being the the room. These are being initialized/set once to be used as a static variable, which cannot be change during the runtime. The first one is macros which has very specific syntax (see video) and the enum, which are a group constants.

💓 My assets:
Get some assets at itch.io

👑 Support me and get fresh game art and game maker projects every month: