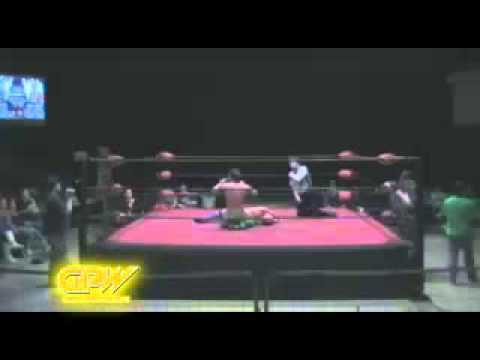 Grand Professional Wrestling is giving away some of our best matches of 2010 FREE TO VIEW as an early Christmas present to our fans across the globe.

*Please be aware that due to the restraints and compression of Youtube, this video is not representative of the DVD quality*

GPW: Jam Hot would be the stage for a HUGE main event. In the final showdown between two of the standout performers in the country – it couldn’t have been more dramatic! The close rivalry between these two had meant that a simple one fall to a finish was never going to be good enough. To settle this the challenger, Joey Hayes, took on the reigning GPW British Champion “The Juice” CJ Banks in a 2 out of 3 falls thriller.

Long time enemies and former friends collided over the illustrious British Title. Both former members of S.I.N, both former champions previously in the company, both former Crazy Cruiser 8 winners. Both men had been through wars and gained the glory that championships garner. But which one would stand tall after not one, but a possible three falls? Who would win this match in what was promised as the LAST TIME that these two men would meet one on one for the GPW British Title?

This match is up for a LIMITED TIME ONLY! So don’t miss it!

All this and MUCH MORE is available on DVD NOW at www.gpwshop.co.uk

And don’t forget to check out www.gpwrestling.org.uk for all the live event news so you to can see your favourite GPW stars in action.

All copyrights belong to their respective owners.